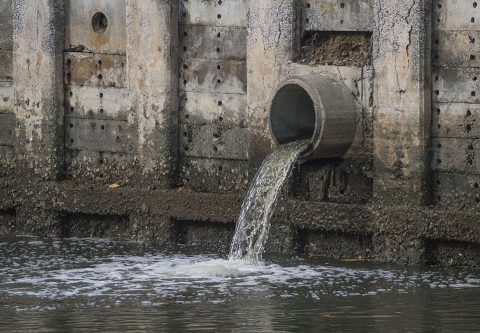 Lawrence, MA – In an interview with Newburyport Daily News reporter Heather Alterisio, Executive Director of the Merrimack River Watershed Council (MRWC) Matthew Thorne commented on the upcoming project in Manchester, NH to reduce Combined Sewer Overflows. In short, the comments were calling for quicker action and more funding to eliminate the issue.

“I think a lot of our outreach and advocacy around this issue is part of what’s putting pressure on cities to hasten the pace of this work,” Matthew Thorne, executive director of the Merrimack River Watershed Council, said in response to the settlement.

Of course, by this Thorne is speaking about the challenge MRWC has taken on to educate the public and policy holders on the issue as a whole, which has been the main focus of the MRWC in the past few years. Due to some hard work and passionate community members, the issue has never had a bigger spotlight than it currently does since the MRWC started posting about overflows on our Facebook page and began providing educational resources about this issue on our website. All this knowledge has led to public outcry for change.

“We don’t think it’s fast enough,” Thorne added. “I mean 20 years is too long to be dumping sewage in the river, and that’s only a 74% reduction. Yes, we’re happy and think it’s great news, but it needs to happen faster.”

The agreement was initially reported on July 14th and has the project taking about 20 years to complete and significantly lessens flow by about 74% but does not completely eliminate it. One thing is certain – this is a good step for the river as Manchester is one of the largest contributors of stormwater pollution within the watershed and everything that enters upriver will pollute those down river.

The city of Manchester should be commended for its leadership on this issue having made several upgrades already to their combined system. We can now turn attention to other contributors of pollution into the Merrimack and point to this agreement as an example of people coming together to solve the problem.